You're missing in the forest and you have to leave... but it won't that easy. You'll have to survive during the dark night next to a bonfire you find... Will you get it?

I created this game in Twine as a way to show my feelings and how to try to deal with them. Sort of like self-therapy. Maybe many of you will know what I'm talking about when you play it.

I hope you like it and forgive me if you see some mistakes about my English as it's not my main language... but I did my best! <3 I really hope you like it. If you enjoyed the game -and you want to support David and me - please consider making a donation by clicking "support this game" button. It'd awesome to receive your support! <3

Reading is the main mechanic. But you have also to survive and there are some actions, like:

I didn't try letting the fire go out, or letting my character go hungry, because I wanted to protect her. I guess the message is "Be excellent to each other." A charming departure from my usual FPS sessions. Thanks for uploading this.

That was an interesting experience. I expected things taking a different turn at the end, but I am glad for how it all played out. Well done!

Please don’t embed that website anymore with your posts. Abuse of iframes will result in the domain being banned. Thanks

Interesting experience! The pixel art is great and I love the attempt at visual feedback for the choices you make and the status of your bonfire.

That being said, I felt that there was something a bit lacking in the game overall. I think this could be a great opportunity to tie gameplay to show certain themes. For example, in the current state of the game, if you choose to ignore Kurt, the game never progresses. Meaning you have to talk to him to progress further in the narrative. If there was a branching decision there to allow for players to not interact with Kurt and/or other people who come by in the woods, that might add a lot to the sense of loneliness and build the other themes that you're trying to convey in the game. It would also help to bring in the player into the main character's shoes of being lost in a forest. Add a couple random events and situations that could arise and you'd make the player invested in the choices they need to make. (EX: Maybe a pack of wolves comes by or a strong wind threatens the status of your bonfire)

I feel a bit disconnected from the situation the game is trying to present when I'm trying to survive alone in the woods, yet there's 4 other people around me doing perfectly fine and who just happen to live nearby.

Generally I don't like to tell people what to put into games, I think it's best to judge what the game currently is. But I see a lot of potential and hopefully this feedback is helpful for future development of your games! Apologies if I come off as being too negative! ;-;

I made a video with my experiences. Keep up the great work!

i really liked this game! the art was cute and pleasing to look at and it held a good message that i know many people need to hear. however, i do have some criticisms as well.

like Callum John said in his comment, there's not a lot of variation in the game play, and it introduces four characters who don't get much development. i think it could've been better if it focused a little more on Kurt and his story, rather than throwing a bunch of characters at you with not much to say about them other than "they all got lost in the woods and Kurt helped them" and "this one says 'girl' a lot".

but that's really all for my criticism. the message was good, between knowing it's okay to rely on your friends to making sure you take care of yourself (and yes, i think i may know what you're talking about. so many people, and i'm included in this, are too afraid to ask for help and too eager to help others without even giving their own being and health a glancing thought), and the graphics and art were amazing. it has a consistent style, there's obvious attention to detail, the colors chosen are great and they compliment each other very nicely, and overall it's just put together nicely. there were a few small things i noticed, such as the text for the hunger and light bar not matching the pixel style of the rest of the game and the text under the bag, but they're not game-breaking or anything. anyway, i do have to applaud you on this. it's a really nice game.

It's all right. This is one of the nicest looking Twine games I've ever seen, but I can't help but feel that something somewhere is... lacking. The game play is really easy without a lot of variation and I didn't really care all that much about the characters.

Speaking of which, the way they speak by giggling to indicate who's talking is a little off putting somehow. Also the font size is really small making it difficult to read comfortably.

That was an interesting game and a thoughtful story. Also, the English was pretty good considering you're not a native speaker, so good work! 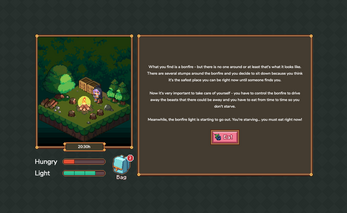 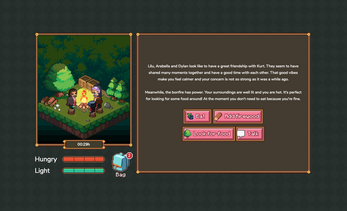